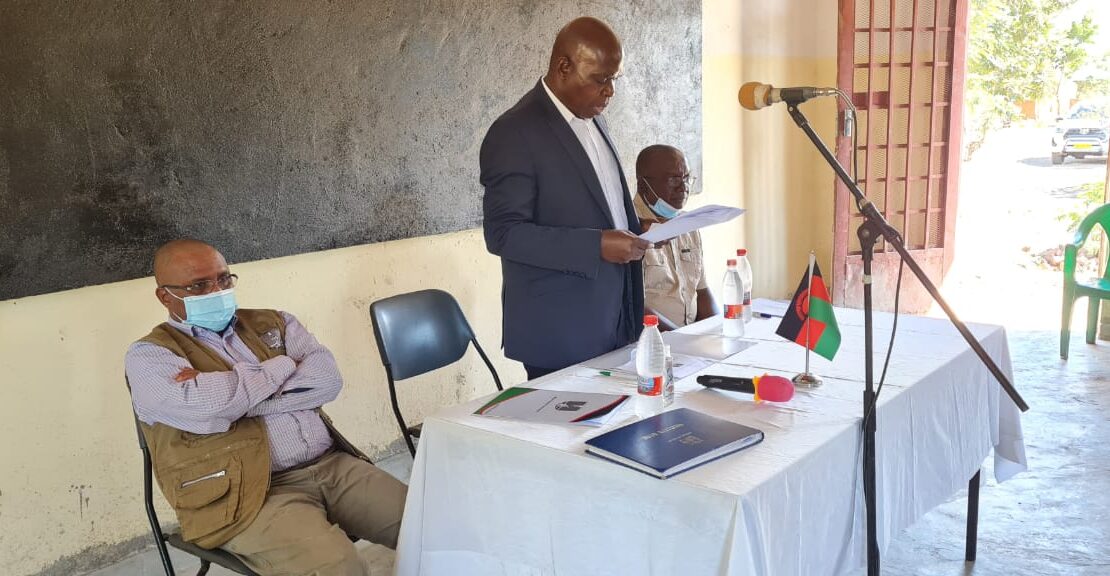 On 9 July, 2022 the Malawi Electoral Commission held stakeholders meeting to launch the by-elections for 23 August by-elections that will be held in three wards.

During the meetings, the Commission presented the electoral calendar and answered questions from stakeholders regarding the by-elections.

Speaking during the meeting held at Lughali School in Lupembe ward, Karonga, Commissioner Dr Emmanuel Fabiano advised the stakeholders that the Commission had engaged village night criers who be spreading messages on electoral processes.

“In the past we used to have loudhailer teams to go and spread messages in the communities but there was a challenge that they were limited to areas accessible by vehicles.

“The night village criers are based in the villages and because they are able to reach every household with the message. When you see them in the villages please listen to them,” he said.

In his remarks, Paramount Chief Kyungu urged the aspirants and all people to unite and maintain peace in Lupembe ward despite belonging to different parties.

“These parties found you or your parents already belonging to Karonga. There is no reason for you to be fighting. We cannot develop if we are fighting,” he said.

At Nkhonde Teacher Development Centre in Shire Ward, Balaka, Commission Caroline Mfune advised leaders of political parties to be in the forefront in mobilising people to participate in the electoral activities.

“In the past voter turnout during by-elections, especially for Local Government has always been low despite all the efforts we make to mobilise the electorate.

“Parties and candidates you have a huge responsibility of mobilising your followers to turnout in large numbers for the polling day because that is what counts unlike having huge patronage during rallies,” she said.

The launch meeting for Wenya Ward took place at Nkhumano Teacher Development Centre and Commissioner Olivia Mchaju Liwewe encouraged all people that registered in the past elections to go and verify their details.

“People tend to stay back and not verify their details because they still know that they will be allowed to vote. But as Commission we insist on you going for verification because it help solve any anomalies whilst there is still time.

“On the polling day we even have cases of people reporting at a wrong centre yet if they came for voter inspection they could have been advised the right centre for them to vote at,” she explained.

Voter registration and verification will run from 12 to 25 July 2025 and centres will be open from 8.00AM to 4.00PM on all days including weekends.

Nomination of candidates will be on 5 August, 2022 and candidates are encouraged to get nomination papers in good time and take them for pre-inspection on 4 August, 2022 by their Ward Retuning Officer.

Shire Ward in Balaka which fell vacant on 24 October, 2021 due to the death of Councillor Patrick Botomani of the United Democratic Front (UDF).

The vacancy in Lupembe Ward in Karonga arose on11 December, 2021 due to the death of Councillor, Vincent Kayuni of Alliance for Democracy (Aford).

Wenya Ward in Chitipa fell vacant because of the passing on of Councillor Pearson Kapira of the Malawi Congress Party on 13th June, 2022.